The design process is iterative. I try something new, test it, receive feedback, and then improve the design. After going through this process many times it is fun to look back on previous designs to see where you started from. Let's look back on one specific card: Large Rally Campaign Bonus.
Version 5 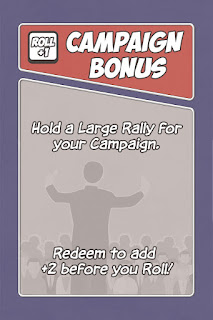 Here is one of the first versions. The design was set by the artist that I hired on Fiverr. The original card was designed for the characters. I took that as a template and built it out for the Campaign cards. The background image I got from a stock photo website to which I have a subscription.
The top Roll +1 and title are a different font than the flavor text or mechanic text.
Version 7 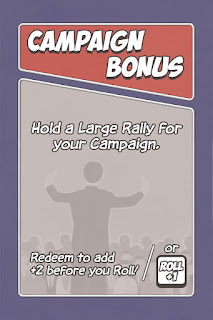 Here we move the Roll +1 symbol down to the bottom-right corner where it will stay throughout all designs. I was not happy with the separator, but it was good enough to test out.
The background stayed gray and muted so as not to distract from the text on the card. I later decided against this as it made the card look dull.
The top text also got a drop shadow which helped it stand out a little better. The bottom text was decreased slightly since I needed more space on a few of the more complex cards.
Version 8 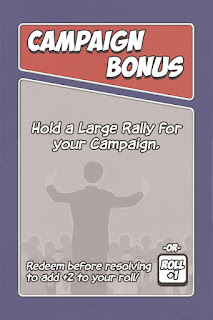 Let's remove the separator and make the text more clear. Some players were confused how this card was supposed to work. So, the text was revised to eliminate questions about cards. Sometimes it does not matter how clear you think that you are someone will have a question! 🙊
Version 10 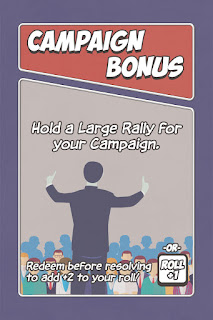 I brought back color and this immediately made the card look sharper. However, the text was now a little harder to read.
You can't see it here, but I tried about six versions of the "-or-" until I settled on one that I was OK with.
I had no way to edit Adobe Illustrator files so when I imported the image it was rasterized and all of the layers collapsed and merged. This meant that I had to manually pull out details that I did not want in the final image.
If you are wondering where version 9 went then just ask Microsoft. 😅
Version 11 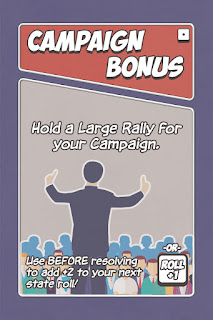 I start stroking the background image which helps it stand out. I did not like how his hands blended into the background. Since it looked better I did this for all the other cards as well. I noticed stroking images as a trend on professional cards from published board games. So I figured that it must be a good idea. 😁
I also try using all caps to signal key words or important parts of the text. This helps your eyes jump to the most important parts.
Version 12 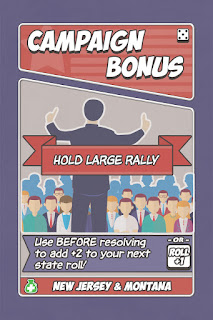 To make the text stand out more I put a background in the shape of a banner. This really helped make the text stand out and maintain legibility.
Another bar was put at the bottom for the donation repopulation mechanic. The player must choose between the two named states. The goal was to make it a simple choice so as to prevent analysis paralysis.
The title got a background to spruce it up. I created these shapes in photoshop with the shape tool. I played around with the opacity until I got it just right.
Version 13 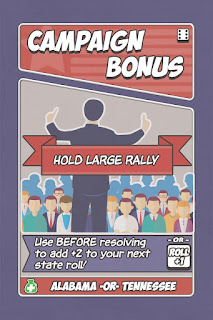 I keep trying to get the debate mechanic working. So I put a die in the upper-right corner of the card. The idea is that the card has use during the debate phase and can be played as a six.
After many iterations of the debate I decided to forgo this mechanic. However, I left it on the card just in case I needed it again in the future. This of course caused some players to ask what it was there for.
Version 14 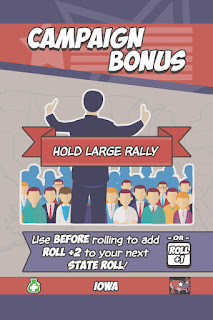 Who needs a border? I decided that I certainly did not! I removed the border and stretched the card to the edges. This changed the look of the card. I felt that it gave a it more modern look. The reason that I did this was to avoid centering issues. If you add a border it is more obvious when the centering is off in the manufacturing process.
I also changed the font for the key words and now they really pop. Another secret reason for the switch to a new font is the look of the number one. The font made it look like a capital I or even an L. In the next font there was no confusion.
I created a mini-map in the bottom to help those that don't know where all of the states are on a map. I did not want a player to feel badly that they did not know where to find it.
Version 15 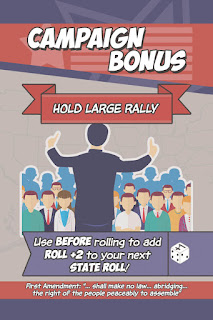 I wanted to try a new dice icon for the Roll +1 in the bottom right-corner. Many people asked what happened to the older one. So, I ended up going back due to popular demand.
The main graphic needed repositioning. I put a background of a wireframe of the states to keep it looking interesting. I chopped the people on the sides as well to fit better.
I removed the donation population mechanic and replaced that area of the card with flavor text. Now I had to spend a lot of time researching fun and interesting facts to put on each card! This took over 15 hours.
Version 16 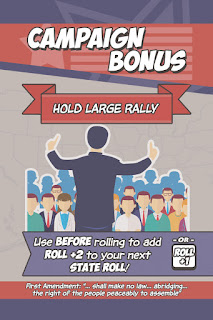 Here is the current card. It is still subject to change, but it does feel like it has moved in the right direction.
So what change did you like the best? Do you have a favorite card?
Thanks for stopping by!
-Matthew-