After many playtest I received a lot of great feedback. The feedback ranged from the simple stuff like a wording change to more complex stuff like a complete re-work of a mechanic. As a designer, you can't implement all of the suggested changes, but you should boil it down into the essence of what was suggested. The most important part of the feedback given is not what they say, but rather what they were feeling that prompted their comment. The play tester's comments might not always be correct, but their feelings are never wrong.

For the next 2 weeks, I spent 2-4 hours per night on average working on new changes. For me, I love to start with the theme and use that to create the new mechanics. This top-down approach has really helped become a source of inspiration. If I need a new mechanic then I need to better understand its analog in the real world. 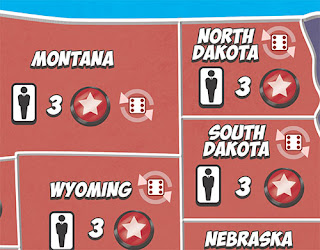 Problem: What can be done about the states with little reward and low VP (Victory Point) value. Players almost never go for them.

Solution: Add a bonus incentive to it! If a 6 is rolled you not only win the state, but you also get to immediately use the Staffer again. It is only a 1 in 6 chance of getting this bonus, but already in a few playtests I have seen people go for them more often.

The game is played over a series of 9 rounds. One playtester had the brilliant comment that they should be months instead of numbered rounds. This is so much more thematic now! Now you can see November coming which mirrors the real election date. This also spawned more great changes as I study the real-life election timelines:

In a real debate, candidates take jabs at the other and try their best to answer the tough questions. Some things that the candidates say tank and become sound bites for the next morning. While other things boost the campaign and can sway on the fence voters. I boiled this down to the following mechanic: 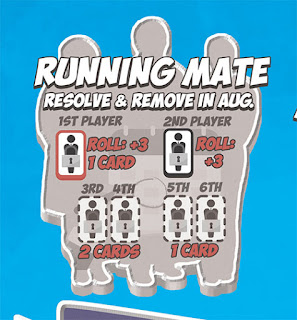 Here is the new Running Mate area. You are massively rewarded to be the first one in this area. However, the sooner that you commit your Staffer here the more rounds you'll be without it! Consider the person that goes for it in the first month. They would have to play a Staffer down until August.

For each spot that is taken the next bonuses earned proportionally drops.

This is an area that will be a competition for players to keep an eye one. If you go too early it might not be worth it. If you go too late there won't be many bonuses left for you.


More playtesting is required! Please let me know if you are interested!