The Prototype has arrived!

I now have in my hands a physical copy of the game! What a joy it was to see and hold something tangible. The dream is becoming a reality!
COVID Delays: 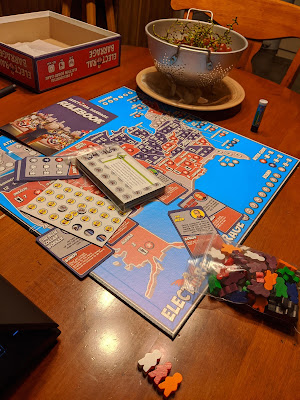 Before the pandemic I submitted the Electoral Barrage artwork to The Game Crafter to print a prototype. I could see mounting tension over a world-wide virus building so I upgraded my order to rush processing. The game jumped to the "front-of-the-line" along with the other rush orders. Since this publisher is located in Wisconsin I suddenly became very focused on what happened there.
The Game Crafter started working with a limited crew, but they continued to crank out orders. Electoral Barrage was actively being worked on and reached eighth from the top of the shipping queue when the governor of Wisconsin issued a shelter in place order. The Game Crafter halted production on all orders. The game was so close to being shipped! With even one or two more days the game probably would have shipped.
Fast forward to about two and a half months later and it arrived! During that interim period I put the game online and have had about 18 play tests. So the prototype that arrived is very different from what the game has evolved into!
First Impressions: 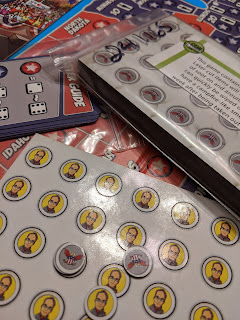 The circular chits are laser cut. The laser slightly burns the paper as well creating a "camp fire" smell. A note was included with the chits explaining this. In 1-2 weeks the smell should go away. These are the smallest chits that I could get made.
I choose the small size to save space on the game board. I was worried that the small size would make them difficult to pick up for large hands. Due to their slightly thicker height there have been no issues picking them up. 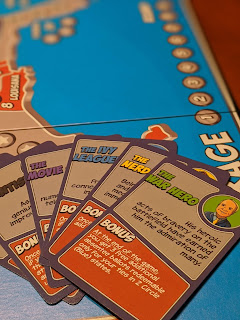 The cards don't feel like a standard Poker deck playing card. I used to do magic tricks as a teen so I have gotten used to the feel of a good card. These feel very plastic like (not a complaint just an observation). The print shows up very well on them. Overall I am very pleased with them.
The board color seems too saturated. The colors appear many shades darker than they should be. I asked printer about this, and they said that this is typical with prints. They recommend using a 20% brightness filter to the colors. This could also be due to conversion from CMYK to RGB color space. 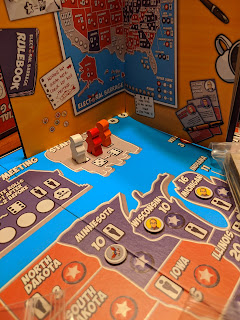 I had another concern about the height of the meeples. I wondered if the height would make them top heavy and prone to falling over. I have bumped and nudged the table over and over and so far they have not fallen. Another victory!
The manual came out very nice. The staples are clean and out of the way. The pages are sharp and the graphics show up nicely.
The chits physically occupy the game board areas perfectly! No adjustments on size are necessary.
Thanks for reading!