Catch Up Mechanics and the Feel Bads

Have you ever played a board game and regretted a decision that you made during the game? Have you felt frustrated that a certain decision took you farther away from victory? Well, during playtests one common comment I get is what I'll call the "feel bad" comment. They player feels bad about some action that they took not paying off. For example, they go for California (must get to a 5 or 6) and they don't get it. Therefore, they spent their action (Staffer piece) and got nothing in return.

Well, I have been working for the past month to turn a negative into a positive opportunity! 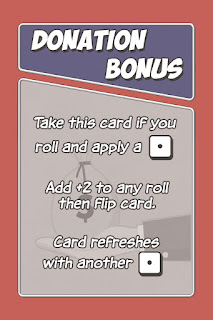 So I set out to make losing a mini-goal that brings its own reward. If the player rolls a one (always an automatic failure no matter what you are going for) then they win this community card. As you can see it gives you a future roll bonus. Once used up you refresh it by failing another roll. In other words, the more you fail the more bonuses you get in the future.

The card started to work as designed, but I ran into a couple snags. The players kept forgetting to use them! Additionally, since it is a community card if another player rolls a one they can steal the card before you even get a chance to use it. I had originally thought that this would be a good thing. My thought was that if everyone does bad then no one gets the bonus. If only one person does bad then only they get the bonus. However, in practice this sometimes turned into a feel bad on top of a feel bad! 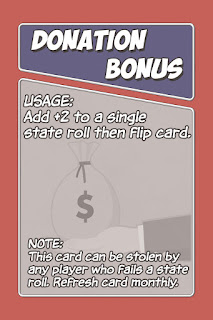 I had another designer suggest that I put multiple cards in play depending on the player count. Also, instead of focusing on just rolling a one it should be expanded to any failure. This was a great idea, but I still noticed that players forgot to use it or did not find the need for it.

I needed to simplify the mechanic.

So I scrapped the card and just make a single rule that you get one free card (from the draw pile) every time you fail an attempt at something. The draw pile cards are already good and this just keeps more cards in play which in turn makes the game more lively and interesting.

This area was the other challenging area to tweak. By in large players liked the area, and they did not want to see it removed. Additionally, the debates are a BIG part of any election campaign. So thematically I wanted to keep it in. However, players almost never felt incentivized to go there. Very few players actually felt that the reward was enough to spend an action. 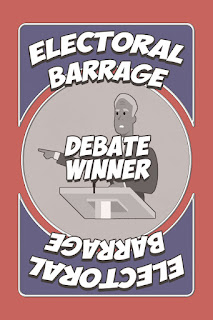 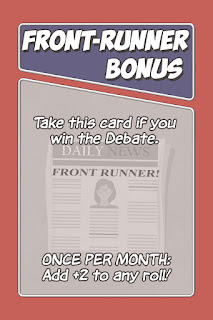 I tried everything that I could think of to entice players to go for the Debate. Some games I made it mandatory. Other games I gave +2 or even +3 rolling bonuses. I tried with and without lowering your actions (Staffers) that round. 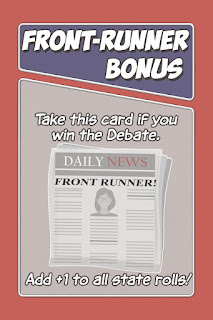 In its current iteration players get the Debate Card by winning the Debate area that round. My inspiration is the Largest Army / Longest Road

community card in another very popular board game. Until another debate is held that player gets +1 on ALL rolls for states.  Forget trying to remember that it can only be used once per month. It is now a big fat every action bonus!

A catch up mechanic can be controversial. Imagine you make better choices then your opponents and you are far in the lead as a result. Should you be able to stay far in the lead or should the game give bonuses to them to push them up closer to you? You can see that the leader would hate this and the last place player would love it.

I don't believe that either are a true catch up mechanic since both are strategic and optional. If you play your cards right you'll never fail a roll as there are a lot of roll mitigate cards. But now you have a lot of new options ahead of you. How will you win the election!?

Thanks for reading and for your time!