What is more thematic in a political setting than a big pile of money! Adding money donations was an idea that I had been kicking around for quite a while, but never included. It adds a layer of complexity so I have to be careful that it really does solve issues to justify its existence. 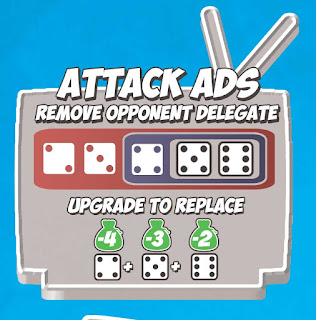 The game is fun when you can flip states. Attack Ads provides the mechanic to do this. It also helps the game scale. If there were no way to flip states the board would soon fill up and you would run out of areas to play in.

Bonus for being first! 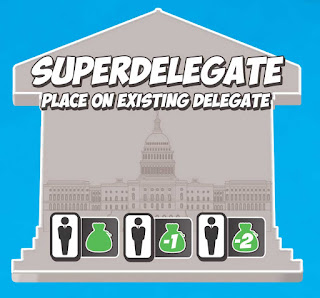 The top of the board started to get under-used and under-appreciated in recent playtests. I needed to come up with a way to incentivize it even more. So now the first player to go there can do so at no cast. However, subsequent players must now play a fee. This rewards players for choosing it first, but it does not completely prevent others from going there as well. 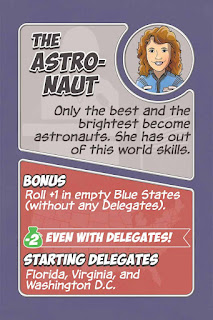 Each character now has two abilities! The default ability is free and can be used whenever the specific condition is met. Given that the player has enough money they can now use a even better upgraded version of that same ability! This should tug at your money pool.

Here is an example:

The regular ability only allows the player to roll a bonus +1 in Blue States without any other delegates present. This focuses the player to go into empty Blue States. However, each time they spend 2 money they can use this ability in a Blue State even with Delegates in it. Time to fly into the action!

See you around the table! Thanks for reading!