A look back before the New Year

What a year! When we look back at the year a lot has happened! So I thought it would be interesting to look back at the evolution of one of the character cards. Currently, I am up to revision 14! 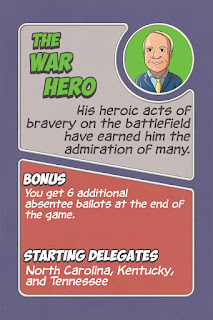 The War Hero embodies that candidate with the military background and battle-tested character. The Green Player used to be required to take this character (hence the green background). 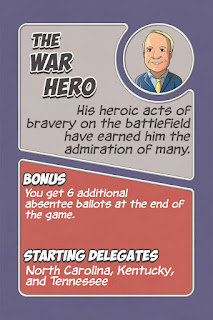 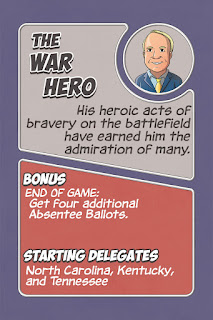 The six absentee ballot bonus proved to be goo powerful. So I tried scaling it down a little. I also tried to make it more obvious that you only get the bonus at the end of the game. 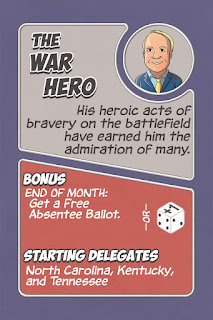 I wanted to give players more decision space. Also, some playtesters commented that they waited the entire game to use his ability only to be underwhelmed. So now the bonus is used after every game round ("month"). They can get the free ballot or a bonus die boost. 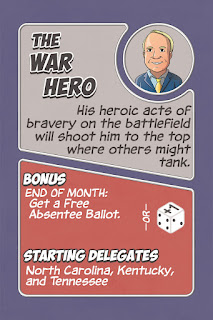 Wanted the flavor text to be more "punny". So now the War Hero's text includes "shoot" and "tank". 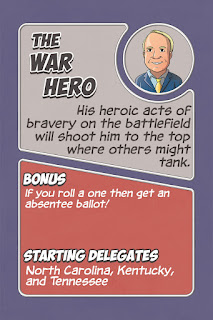 After lots of rules explanations later I decided to try and simplify the rule for this character's ability. Also, linked it to a lucky die roll. Now you get something good if you roll a one which would otherwise be bad. 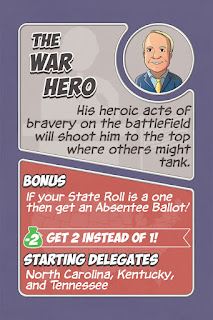 Since there are other things that you can roll for (like the Debate) I had to specify that the rolling bonus only applied to rolls for states. Also, the donation currency was now introduce into the game. So I added a supercharged version of the ability.

I also tried tried to spruce up the card a little. The plain background seemed a little too plain. So now there is a silhouette of a character and a flag. I added a "box" around the supercharged ability to help separate it from the regular ability. Also, put the states behind the bonus text. 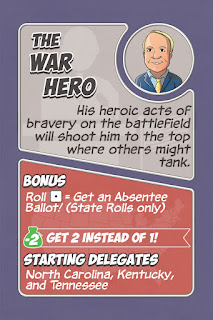 Here I'm trying to remove text and replace with symbols. The goals is to remove as much language as I can. I am also trying to streamline the understanding of these rules. 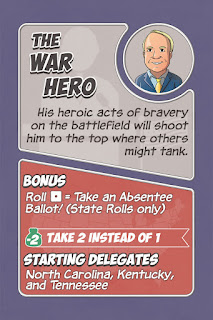 Stroked the text to try and help it stand out a little more. Shrunk the flavor text as it was not super important to read.

Changed 'Get' to "Take' to make it more obvious that it is an action that you perform. 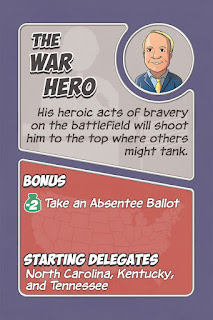 Current Version (at the time of this article).

Removed the supercharged version of the ability. This seemed to add another level of complexity that I was not happy with. I also took out the luck element. Now this ability is based on your available funds.

Thanks for reading and have a Happy New Year!